The Ninth Wave is the creation wave that was activated on March 9, 2011 and has continued to run ever since. By all accounts it will continue to oscillate as a sine wave without end. It is the highest frequency wave of the Mayan calendar system and has a complete wave period of 36 regular days. A new such wave period, which is the 63rd wave period since its inception begins April 18. 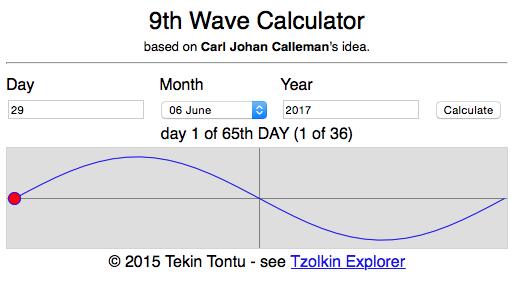 Next, the 64th period will start on May 24, a day that for instance will be marked by San Bushmen in Cape Town (https://www.youtube.com/watch?v=JLFsEXQtbJw&feature=youtu.be). Then, June 29 begins the 65th wave period that will be marked by international ceremonies. In this article I will attempt to explain and describe why such global events are being created and why it is part of our evolutionary purpose to follow the Ninth Wave. Internet resources that describe this may be found at http://www.2near.com/edge/carl/mayacc20.exe, http://www.xzone.com.au/9thwave.php or http://ahau.pagesperso-orange.fr/wave20172017hi.jpg

In contrast, the marking and empowering of the beginning of new days (or peaks) of the Ninth Wave, for instance on April 18, May 24, June 29, and August 4, 2017 etc are not one-time events. They, as well as any other starting point of such a wave period are about creating awareness in yourself and others of the existence of a wave generating unity consciousness and to help you tune in to the frequency of this. This wave is the positive forward-moving wave that was created in the shift of 2011 that leads to the manifestation of the destiny of humanity as a unified species and no one talking about being part of the shift should ignore it.

What this means is that it is especially in the peak periods of the Ninth Waves that projects towards unity consciousness will have wind on their backs and this is true also if your project is simply yourself and your way of being in the world. This also means that you will have to gain and spread awareness of this wave so that you as an individual can gain the necessary guidance for how to be and act in this world even under very chaotic conditions created by lower frequency waves. This guidance is given to you especially during the peak periods of the wave whereas the valley periods are essentially periods of reaction when you have to deal with whatever in yourself is inconsistent with the manifestation of unity consciousness. This insight can only be gained from your own experience and the fact that I or someone else may be advocating creating the awareness of the Ninth Wave has little import if this is not consistent with how you experience the ups and downs of the 36-day wave form. It is only to the extent that you are able to experience your awareness that this wave form fundamentally is what conditions your process towards unity consciousness (or ascension as some would prefer to say) that you will successfully be able to tune in to the frequency defining the destiny of humanity and allow you to be part of manifesting this.

What this means is that the crucial thing is to be able to observe yourself in relation to the wave form and this will come out of learning how to tune in to it. This does not by itself require that you participate in large scale ceremonies or meditations although such events will help alert you to what is happening in the energy field that underlies the material aspects of our existence. It is perfectly sufficient that you light a candle or a sacred fire or face the sun on the first day of a day to mark that for the next 18 days you – as a being committed to the creation of a Golden Age – will have wind on your back. You may also pray for guidance for this time period regarding what steps you should take in your individual projects (and these may be very diverse) to have this come true.

The development of resonance with the Ninth Wave is thus not a one-time event. It is something that will occur over time as you fine-tune your experience of it. This requires marking several of its beginning points and this is not really a process that has an end. Over time you will increasingly become an expression of the Ninth Wave, and if you believe in the return of Quetzalcoatl, or the Plumed Serpent, you will be it. Naturally, it may be argued that there are people that are manifesting unity consciousness without consciously having developed resonance with the Ninth Wave. Nonetheless, such resonance can still be a remarkable aid also to such individuals as it makes them fully aware of the existence of such a creation wave, which is directed towards the future of humanity in unity. To also actually follow this wave with its ups and downs may in addition provide a self-correcting instrument of great importance for those who try to navigate the many large waves that exist in the ocean of creation.

To make an analogy we may look at tuning in to the Ninth Wave somewhat like tuning into a newly established radio station. First of all you and other people need to be informed that this station exists and for this purpose it is useful to stage public events informing about it. Secondly, you have to know at what frequency the station is broadcasting since otherwise you will not be able to hear it. Third, the listener may need to work to optimally tune in to the frequency so that he or she gets a clear signal. The latter is all the more important if there are several other stations that are powerfully broadcasting at competing frequencies that may make it difficult to hear the desired station. This is very much the case regarding the Ninth Wave since there are lower waves that prevent the listener from getting a clear signal. This is the real crux of the matter. Hence even if there are many groups and movements that are talking about Oneness, Ascension and fourth-dimensionality, but unless their work is connected to the Ninth Wave they will not be able to gain the guidance to get there.

So will the world change on days such as April 18, May 24 or June 29? What absolutely will be enhanced during the 18 days following such dates is the potential for manifesting unity consciousness. Already now we may see some steps in the direction towards unity also on a global scale occurring on such dates. You may for instance make note of if certain ideas or persons in power are supported by the days or the nights. This will tell you much more about the future of a phenomenon than political opinions. Yet, nothing changes in the time periods that are days unless people tune into the energy shifts and change, who you are in the world as a result of your resonance with the Ninth Wave. Over time we will then see a strengthening of the process toward unity consciousness in such a way that actions and projects expressing unity are increasingly synchronized also on a visible global scale. Resonance with the Ninth Wave will in other words increasingly become a synchronizing factor for positive projects for the world. Personally, I believe that unless a large part of humanity develops such a resonance we have very little reason to expect that our species will survive. To counteract a potentially disastrous future we must then now urgently develop a collective calling to manifest our Golden Age destiny of unity through resonance with the Ninth Wave. And it can only happen day by day.