An updated calendar of the Ninth Wave, covering the time until October 31, 2015 is now available from the web page 4-ahau.com and can be downloaded together with the Mayan tzolkin from http://ahau.pagesperso-orange.fr/ Tzolkin_wave_calendar_HI.jpg. This Ninth Wave displayed in this calendar is the wave with the highest frequency in the Mayan calendar system. This wave is the first one to bring the possibility of experiencing and manifesting unity consciousness in the past 5000 years and so the resonance we develop with it will play a decisive role for the future of humanity. Nonetheless, since it has only been active for about 4 years (since March 9, 2011) the percentage of humanity that is in resonance with it is presumably still quite small, less than one per cent at the current time, in my own estimate. Since such a low number is hardly what is necessary to generate a critical mass we will most likely have to wait some time before the Ninth Wave generates events on a global scale. This however does not mean that following the Ninth Wave is not of interest as I believe that already now it may be used as a tool for self-exploration and in order to accelerate the crucial ability of humans to download unity consciousness.

For the most part people today who follow some aspect of the Mayan calendar limit themselves to the 260-day sacred calendar, or tzolkin. It may then be in place to explain what is the difference between following this and following the nine waves of creation (in ancient times these nine creation waves, or nine winds were referred to as the Plumed Serpent, or Quetzalcoatl). I would say that the tzolkin through its combinations of numbers and glyphs describes the spiritual qualities of the days and have been doing so at least since about 550 BCE. Yet, the tzolkin just repeats itself cyclically every 260 days and is not leading humanity anywhere. To understand the large-scale evolution of history and where this is going we instead have to look at the shifting energies of the nine major creation waves.
It is the shifting energies of the nine creation waves that the Mayan calendar system is constituted by that drive history forward and prevents it from just cyclically repeating itself. The Nine Waves in other words have a direction that is very important for those that want to experience what possibilities are available to us now and in the future. It is also the nine waves, and not the tzolkin, that determine our spiritual frequencies and levels of consciousness. Associated with these frequencies and levels of consciousness are certain polarities of the mind that determine the openness to the spiritual domain that people in resonance with the respective waves may have. As you may see from Fig 1, ever since the tzolkin came in use about 2500 years ago, three new waves of the Mayan calendar system have been activated, the 7th, 8th and 9th waves. Each of these waves carries a new level of consciousness despite the fact that the tzolkin has remained the same. A day that was for instance 4 ahau two thousand years ago are in other experienced at an entirely different level of consciousness compared to a day which is 4-ahau today. Since new waves of evolution with higher frequencies have been activated people also have very different frequencies today.

Note that I am not here downloading the value of following the tzolkin. Instead, we need to recognize that the different Mayan calendars have different functions and following them may serve us for different purposes. The conclusion from the above is then instead that if we want to develop our consciousness in accordance with any particular frequency or polarity of these waves then it is not enough to follow the tzolkin alone. Instead, we have to follow the calendar of the particular wave that we want to be in resonance with. 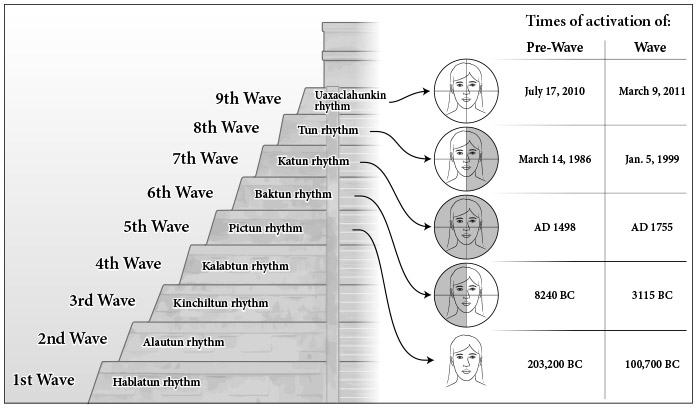 Fig 1. The nine levels of evolution of the cosmos as symbolized by a nine-storied Mayan calendar and the corresponding polarities of the mind and their dates of activation.

The 6th, 7th and to some extent the 8th, waves are already well established among humanity and manifest a reality among humanity consistent with the polarities that they generate and their shifts between DAYS and NIGHTS. (Hence for instance the dualist polarity of the 6th Wave has created an immense amount of conflicts and warfare for the past 5000 years or so). The Ninth Wave on the other hand has only been active for four years and for this reason it has so far not yet become established among humanity. Yet, the Ninth Wave is the wave that develops the highest level of consciousness, and unlike the lower levels of the 6th, 7th and 8th waves people in resonance with this wave have no filters to the perception of reality. It is the 9th Wave – and only the 9th Wave – that generates the unity consciousness that may serve to create a better world for us to the extent that we are able to develop a resonance with it. This is the top-level on the nine-storied Mayan pyramid of evolution, and another way of describing its unity consciousness, is to say that people in resonance with it have a direct channel to the divine, unobstructed by filters. The unity consciousness provided by the ninth wave thus provides the best possible guidance for human beings as to how to act and be in the world and serve to manifest the divine plan. It is because some people in the past years have come to resonate with this wave that they have experienced a shift, and beginning awakening among humanity despite the multitude of conflicts that are generated by people in resonance with lower waves.

This is why actually following the Ninth Wave may be valuable to us because it tells us to what extent we have been able to do the necessary spiritual work to establish a stable and reliable relationship to the divine and a higher level of consciousness. In this view, people who have accomplished this will find that the Ninth Wave (http://ahau.pagesperso-orange.fr/ Tzolkin_wave_calendar_HI.jpg) and its shifts between DAYS and NIGHTS determine when they have flow in their lives and not. People, on the other hand who have not developed a resonance with the unity consciousness of the Ninth Wave are not likely to experience an influence by this or its shifting energies. I invite everyone to explore his or her resonance with the Ninth Wave and use this as an indicator as to where they are on the climb of the nine-storied pyramid. It is something that each individual will have to generate the answers to him-or herself.

39 thoughts on “Following the Ninth Wave”